If you have any questions, email us at...

Your Car Is Your Second Home, Keep It Clean
With Auto Vaccine!

Your Vehicle is a Happy Vehicle

Odors are caused by bacteria/pathogens; Our active ingredient is safe for people/children, pets/animals & the environment. Stop using ionizers and ozone generators! Permanently remove odors from your life with Auto Vaccine™.

Auto Vaccine™ is a safe, effective, broad-spectrum solution for odor elimination inside rooms.

Auto Vaccine™ delivers the power of chlorine dioxide (ClO2) gas, a safe and effective biocide, in an easy-to-use disposable delivery device, designed to eliminate odors quickly inside a room.

Auto Vaccine™ is a not a masking agent or an odor absorbing compound.

Auto Vaccine™ is a slim, lightweight engineered membrane pouch containing pre-measured amounts of the precursors that generate ClO2 gas. When exposed to small amount of water, the patented device releases a pre-determined amount of ClO2 gas in a fast release manner to penetrate all areas inside the house. The ClO2 gas breaks apart airborne compounds that constitute odors and controls the microorganisms emitting these compounds. Auto Vaccine™ truly eliminates odors at their sources, improving both the aesthetics and the hygiene inside the home. Adsorption and absorption are capable of controlling odors by inactivating odor causing compounds but these processes cannot control the sources of the smell, such as mold and bacteria.

Auto Vaccine™ is not a spray, a propellant or a cleaning agent.

Auto Vaccine™ is a self-contained, point-of-use odor elimination system. Upon contact with water, it is self-activated to generate ClO2 gas that disperses inside the room rapidly. No manual spraying, pouring, wiping, aerosol cartridges, or batteries are required. The user needs only to remove the Auto Vaccine™ pouch from its outer package and activate it inside the Auto Vaccine™ clamshell. The pouch has been designed with a built-in indicator, turning from blue to white as the pouch has activated and completed the treatment. The versatility of Auto Vaccine™ makes it an effective solution for controlling odors related to pets, tobacco, food, vomit, mold/mildew, fire and flood damage.

Auto Vaccine™ is for use inside the home, confined spaces and for commercial applications such as hotel rooms. Southeast Odor Science in-house research and development capabilities allows efficient development of custom-made products to meet the consumers needs. Please consult with Southeast Odor Science for special applications requiring a custom-made product. 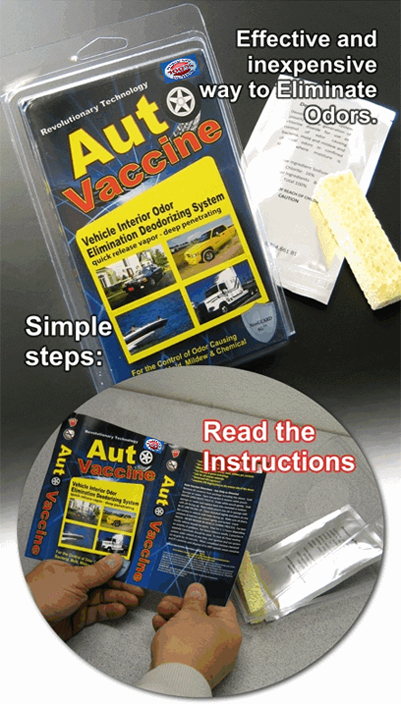